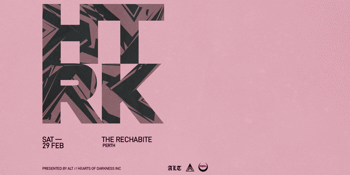 Erasers + Slow Point
The Rechabite (Northbridge, WA)
Saturday, 29 February 2020 7:30 PM
4 days away
18 Plus
Music
Send this event to
Visionary electronica duo HTRK, aka Jonnine Standish and Nigel Yang, bring their live show to Perth off the back of their latest LP, Venus in Leo.

In this rare live performance - and first Perth show in over five years - audiences will step into The Rechabite’s newly refurbished grand hall and immerse themselves in HTRK’s sound universe, where the cavernous reverberations of dub techno are mixed with frosted post-punk motifs and the gravelly imperfections of industrial.

Throw together the core influences of HTRK and you’ll find David Lynch’s unsettling surrealism next to Bill Henson’s industrial landscapes, with Mika Vainio’s minimal compositions alongside the malfunctioning synth-pop of Suicide.

One of Australia's most esteemed bands, HTRK formed in Melbourne in 2003 with their early live shows catching the attention of ex-Birthday Party guitarist Rowland S. Howard who went on to produce their now classic debut ‘Marry Me Tonight’.

HTRK’s new album, Venus In Leo, arrives five years on from 2014's Psychic 9-5 Club. While some much-loved HTRK hallmarks remain — the combination of space and intimacy, the unmistakable interplay between Yang's guitars and Standish's vocals — Venus in Leo differs markedly in its energy, returning to HTRK’s underground rock past with the stylistic playfulness and variety of a modern mixtape.