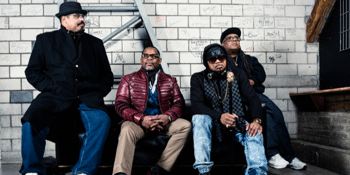 Godfathers of Hip Hop” – THE SUGARHILL GANG are one of the most iconic and music acts of all time. The godfathers, the first Hip Hop superstars and one of Hip Hop‟s most revelled icons attained superstardom with the hit record “Rappers Delight”. With over 12 million units sold, the group not only scored the very first Hip Hop song but the biggest selling Hip Hop record of all time. It sampled Chic‟s (Nile Rodgers) disco classic „Good Times‟ and was an instant worldwide phenomenon. TV and radio loved "Rappers Delight” just the way it was and the single became one of the biggest songs in music history. “Apache” brings on the dance craze made popular by Will Smith and PSY- Gangnam Style.

Fans can expect a memorable performance with hits such as “Rappers Delight”, “La La Song”, “Apache”, “8th Wonder”, “Showdown”, “Kick it live from 9 to 5”, “Living in the fast lane”, new songs and a few surprises!

“So much fun. Justin Bieber was on another stage. As soon as Sugarhill Gang started, their tent filled up then overflowed with ex-Beliebers. One of the highlights of V Festival.” (Fan, V Festival UK 2016)

For all artist info visit:
www.facebook.com/originalsugarhillgang