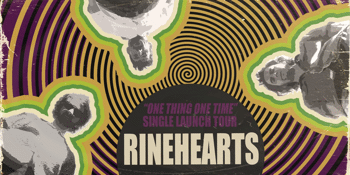 with special guests Big Orange, The Mackerels & Lonesome Dove
Milk Bar (Inglewood, WA)
Friday, 13 August 2021 8:00 pm
8 days away
18 Plus
Music
Send this event to
Rinehearts are hitting the road in WA in July as part of their 'One Thing One Time' single launch tour!

The new single was recorded at Musgrove Studios with long time friend and engineer, Al Smith of Bergerk Studios and is a swirling indie pop-rock gem that shows the band have new twists and turns developing in their song writing.

Following a busy year touring with Even & Immigrant Union as well as a string of supports and radio appearances around Australia, Rinehearts are currently working on the follow up album to their critically acclaimed debut 'Cant Do Nothing'.

In the meantime catch them live at Milk Bar on Saturday 10 July with very special guests Big Orange, plus The Mackerels & Lonesome Dove who'll also be launching their own singles on the night.

This is an 18+ licensed event. Valid ID is required for entry.