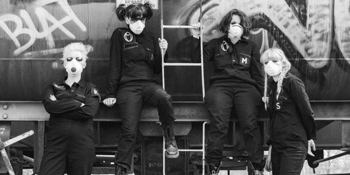 Glitoris has earned a reputation as one of Australia’s most fearlessly political, uncompromising and unforgettable live acts. Crowned ‘Queens of Australian Punk’ (The Brag), Glitoris release their brutal, unapologetic hard rock anthem ‘Slut Power’ (14/2/20): a raging call-to-arms dealing with the insidious nature of violence against women. Straight off the back of winning the NLMA’s ‘Hard Rock Live Act of the Year’ (2019), 2020 sees Glitoris embark on their biggest national tour to date. Glitoris blends frenetic punk rock, classic hard rock riffs, metal prowess, pop harmonies and a dash of theatre with badass attitude and indelible songwriting, resulting in a unique, powerful and unrelenting musical force. Following up on the critically acclaimed debut album ‘The Policy’ (2018), extensive touring with the likes of Regurgitator and festivals including Groovin’ The Moo, 2020 promises to be their fiercest yet \*/

Brutal. Uncompromising. Anthemic. Slut Power calls out the insidious nature of violence against women against a relentless, driving hard rock backdrop. Glitoris’ live anthem finally gets the single treatment: a rallying cry for the #metoo generation, annoyance turns to frustration turns to rage in this unforgettable powerhouse track culminating in a defiant raised fist.

‘No one in the audience could tear themselves away from the show. Exciting, energetic and entertaining, the group are brimful of musicianship, savage wit, charisma and confidence.’ – The Music (The Metro, Sydney)