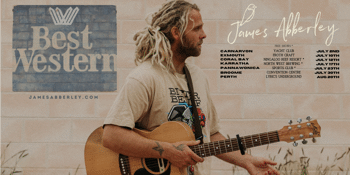 with special guests Banjo Lucia
Lyric's Underground (Maylands, WA)
Friday, 20 August 2021 7:30 pm
22 days away
18 Plus
Roots
Folk
Send this event to
James Abberley announces huge WA tour from Perth to Broome!
Catch James August 20th when he brings his hypnotic high energy show to Lyric's Underground for the first time.
“There's a real beauty in music that's able to transport you to another world, especially at a time like now.
Someone that understands that - and has the skill set to do that, no less - is West Australian musician James Abberley, who over the last two years, has blossomed into one-to-watch on the west coast” (Pilerats)

Based in Margaret River in the southwest of WA, James has made a name for himself as one to watch!
His music is heartfelt and melodic and will leave you craving more.

James truly does blur the lines of a modern-day singer songwriter, with a tradition folk approach,
his songs are drenched in soul and summer swept vibes, and they will be stuck in your head for days.
With a high energy show full of Melody and storytelling James has been hailed one of the best in the business.